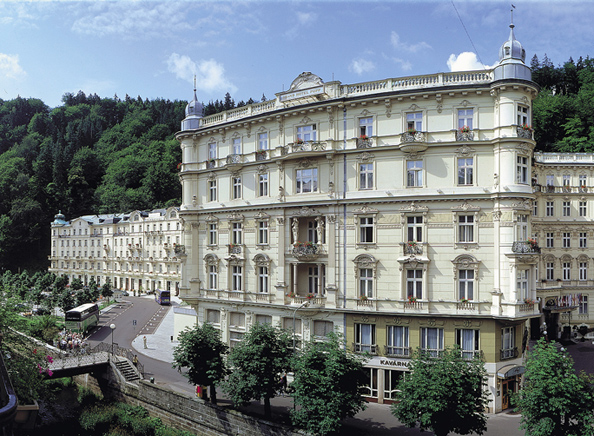 The Grand Budapest Hotel, Wes Anderson’s imaginary epitome of pre-war European luxury and sophistication, has a real-life equivalent. Both Anderson and production designer Adam Stockhausen have cited the Grandhotel Pupp in the Czech Republic’s spa town of Karlovy Vary as the primary inspiration for their fictional hotel. 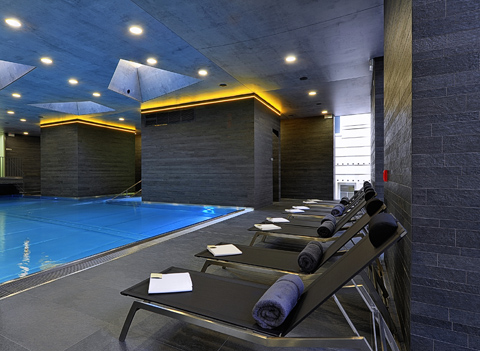 Built in 1701, the 228-room Pupp and its in-house hot springs attracted 19th century luminaries such as Ludwig van Beethoven, Richard Wagner, and Franz Kafka, as well as numerous aristocrats. More recent guests have included Helen Mirren, Jude Law, John Travolta, as well as Queen Latifah, who stayed here when her 2006 film Last Holiday was shot in the hotel. It also portrayed the Hotel Splendide in Casino Royale and hosts the annual Karlovy Vary International Film Festival, Eastern Europe’s most prestigious movie fest. (Anderson himself visited the Pupp when his Moonrise Kingdom was in the festival.)
Like the Grand Budapest, the Pupp fell into decline under Communism after being nationalized by Czechoslovakia’s government in 1951. However, it was acquired by private owners in 1989 and has now been restored to something of its former glory, with a medical spa and five restaurants. But alas, Gustave H.—Ralph Fiennes’ mustachioed concierge in The Grand Budapest Hotel—remains irreplaceable.
Posted by Unknown 1 comment: