OK, so you have your self-catering apartment in Barcelona all booked up and your all set and looking forward to your break. Now all you need to do is make some exciting plans and why not take advantage of having your own kitchen. So cooking while on holiday may not be considered the best way to spend your time and relax but maybe it’s nice to do it for one night for yourself and family and friends.

You may be surprised to learn Barcelona actually looks toward France and central Spain for some of its culinary inspiration. Its bullabesa (bouillabaisse), cargols (snails), and anclas de ranas (frog's legs) are clearly Gallic-influenced, while a classic stew like escudella i carn d'olla -- viewed by singer-songwriter Lluis Llach as "reflecting all the wisdom of Catalan people" -- is really a blend of the French pot au feu and Madrileño cocido, and the ubiquitous lechona (suckling pig) is an import from central Castile. In countryside inns (or ventas) you'll often find game like hare and pheasant, which again show influences from the rest of Spain.
But the real traditional cuisine throughout Barcelona and its inland areas is rather like the inhabitants: Solid and gutsy. Meaty dishes such as veal and blood sausage are accompanied by hearty garbanzos (chickpeas), lentejas (lentils), mongetes (white beans), or judias blancas y negras (white- and black-eyed beans). And the traditional fishy paella of southerly neighbor Valencia is often transformed into noodle-based fideuà containing rabbit, chicken, and rich regional botifarra sausage.

Since Barcelona is right beside the Mediterranean, conventional seafood and rice paellas also abound. The long Catalan coast shelters over 30 fishing ports and fish is a supreme passion with local gourmets; the choice highly varied. A popular local dish is suquet de peix, a rich fish-and-potato stew that was once a favorite breakfast of fishermen who'd been out on the water with their nets all night. Another masterpiece is zarzuela, a stew that combines an extraordinarily wide range of Mediterranean fish, from salmonetes (red mullet) and besugo (bream) to mejillones (mussels) and gambas (prawns). Sardinas (sardines) are particularly scrumptious -- and inexpensive -- when grilled over a pine-wood fire. Squid, octopus, and sepia (cuttlefish) feature heavily, from calamares romana (deep-fried squid) to chipirones (bite-size baby octopus, also fried) to squid cooked in its own ink. Basque-style bacallà (salted cod), originating from chillier Northern Atlantic waters, is another favorite, whether it's simply baked (a la llauna) or forms the base of a cold garlicky hors d'oeuvre called esqueixada. (Don't confuse this, by the way, with the similar-sounding escalivada, which consists of strips of chargrilled sweet peppers and eggplant/ aubergine, and is also served cold.)

Catalans are particularly inventive with their tortillas (egg, not corn variety), and these can include white beans, asparagus, and garlic shoots, often served with pa amb tomàquet, that Catalan gem of simplicity consisting of bread, garlic, crushed tomato, and generously applied olive oil. (Some of Spain's very best oil comes from Catalonia's Lleida province.) A pungent white sauce that adds an extra dimension to any meal is alioli, made from garlic, salt, and mayonnaise.

Vegetables are not common accompaniments to main courses, but an ensalada catalana -- a salad of lettuce, tomato, onions, and olives -- is invariably available, with the added bonus of local cold cuts like mortadella or mountain ham. Vegetarians and vegans should always check that no meat is included in what appears to be a vegetable dish or salad on the menu. Desserts are more modest and include the nifty milk-and-egg-based flan (caramel custard) and crema catalana (crème brûlée). Probably the best local cheese-based dessert is mel i mató (mel is honey and mató a very soft goat's cheese almost resembling yogurt: Quite delicious). Another popular creamy goat's cheese is garrotxa, which comes from inland Catalunya; while a more conventional dry tangy goat's cheese is serrat from the Pyrénées.

Though foodie frontiers in the city are not absolute, there are certain areas that are known for certain types of food. The heart of the Barri Gòtic quarter is, for example, one of the best spots to sample good old-fashioned Catalan cooking (as at Can Culleretes), while Barceloneta is an unrivaled location for gorging on Mediterranean seafood. In sophisticated L'Eixample, the food is as richly inventive and innovative as the moderniste architecture it touts. Eat lunch at a key spot like Gaig and you'll get the picture. Also don't miss L'Eixample's elegant Toc, which offers the classiest traditional escalivadas (grilled peppers and eggplants/aubergines marinated in olive oil) and esqueixadas (shredded salt cod salad) in town. 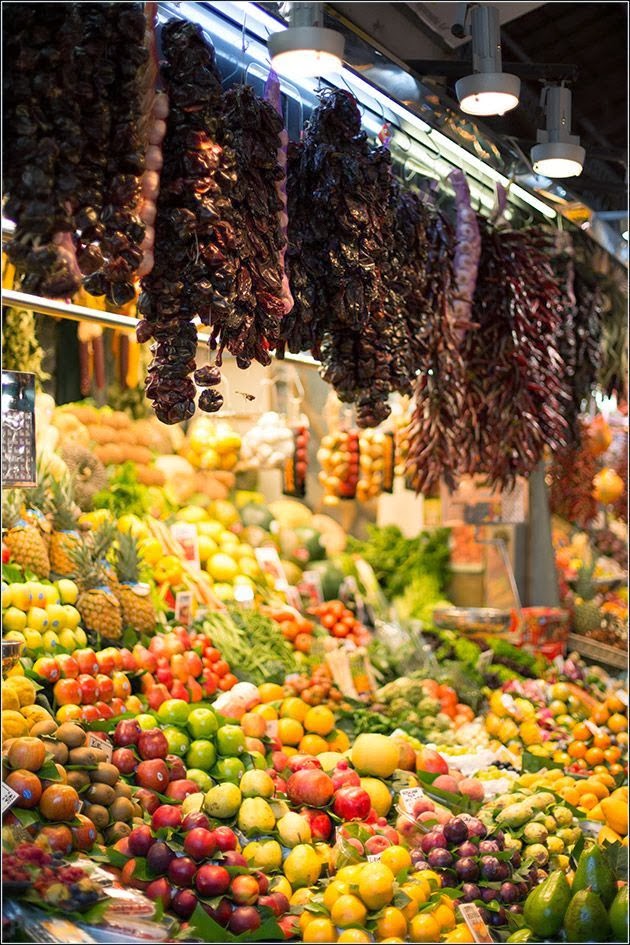 In polyglot El Raval you'll not only find cheap and cheerful Middle Eastern, Mexican, and Filipino joints, but also some stunningly stylish Mediterranean "fusion" establishments (check out the delectable Lupino). Although Barcelona is not traditionally known for its tapas, you'll find some highly imaginative versions all over, but especially in a chic La Ribera bar like Comerç 24 and in the delectable Mam i Teca, back in El Raval.
You can find excellent country cooking without heading out into the lovely Catalan countryside in the Pedralbes district, where, high above the city beside a serenely beautiful monastery, the homely Matóde Pedralbes offers rustic venta (country inn) style dishes such as anclas de ranas (frog's legs) and cargols a la llauna (snails). If seafood takes your fancy (and where better to enjoy it than beside the Med?) then Barceloneta's Mondo and Lluçanes are just two of the newer incentives among the veritable sea of marisquerías and tabernas that fill this uniquely nautical quarter.
The traditional covered markets are a must-see for foodies. They were built in the city's moderniste heyday and are worth visiting as historic monuments as much as exotic food emporiums. Top markets are the famed Boqueria, Santa Caterina, Sant Antoni, and Barceloneta. Feast your eyes on their curving arches and high ceilings before savoring the colorful cornucopia of local produce filling the stalls.

Catalan wines, though less world-renowned than the northerly Riojas, are in fact among Spain's best -- particularly in the southerly Penedès wine region where enologist Miguel Torres produces rich Corona reds and Viña Sol whites. Penedès also accounts for about 75% of all the cava (sparkling wine) made in Spain, and the infinitely different varieties range from small family-made "garage" bodega wines to international brands like Freixenet and Codorníu, produced in cava capital Sant Sadurni d'Anoia. Codorníu is housed in a spectacular moderniste building that is part of the Spanish heritage trust, with 15km (9 1/3 miles) of underground tunnels to explore while you learn about the cava-making process.
The jewel in Catalonia's winemaking crown, however, is Tarragona province's deep, dark red -- and impressively expensive -- Priorat. Its most notable promoter was Carles Pastrana of Clos L'Obac, who set about establishing a set of D.O. (denominación de origen) standard rules and regulations.
The famed sangria, a red-wine punch that combines wine with oranges, lemons, gaseosa (seltzer), and sugar, was originally conceived as a refreshing summer drink blending cheap wine with gaseosa or lemonade, though today's spirit- and additive-boosted touristy versions tend to be artificially stronger, so take care.
If you prefer something lighter, there's lager-like San Miguel cerveza (beer), which, though originally from the Philippines, has been produced for decades in inland Lleida. This is by far the province's most popular beer. All beer tends to be lighter, more like the U.S. version than the British. A clara is a glass of beer mixed with lemon soda. A small bottle of beer is called a mediana, and a glass is a caña.
Although water is safe to drink, many find the taste of Barcelona's tap water unpleasant. Mineral water, in bottles of .5 to 5 liters, is available everywhere. Bubbly water is agua con gas; noncarbonated is agua sin gas. Vichy Catalan, salty carbonated water that many people believe acts as a digestive aid, is very popular. Soft drinks are also popular, and standard, nationally produced versions of cola are widely available.


The coffee you have with your breakfast or after your meal is invariably first-class, rich, and strong, and if you've waded through a particularly large lunch or dinner, a carajillo, coffee containing a dash of cognac (Catalonia's top cognac brand is Mascaró), will either finish you off or help it go down.
Posted by Unknown